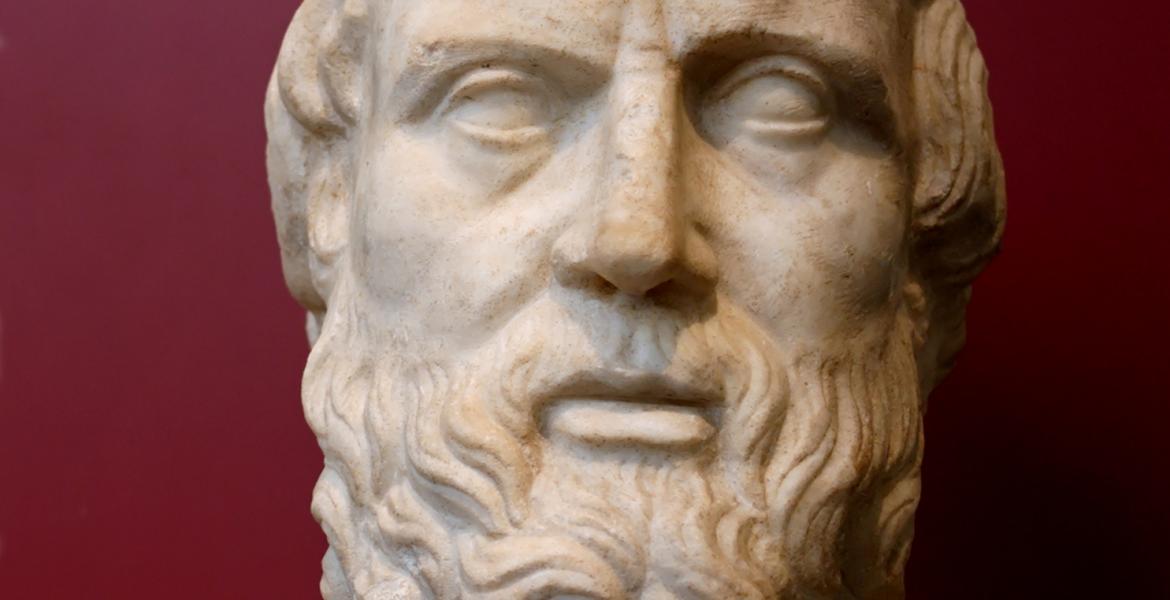 Herodotus, the father of history

A Brief History of History

In the ancient past, what we would call ‘history’ was something created and recreated to fit a purpose: a king might invent a history of himself and his family to explain why he took the throne, or a myth might be made to explain a brutal war. Facts, or what actually happened, didn’t matter as much as the story. The past, when told like this, moved: stories changed over time to suit those telling them. Almost 2,500 years ago a Greek from Halicarnassus (Bodrum in Turkey) named Herodotus set out to change this. He was born towards the end of the Persian Wars, in which the Greeks fought the Persians (who were based in modern-day Iran, but whose empire stretched from the Aegean Sea in the west to parts of China in the east) in the great battles of Marathon, Thermopylae (where the Spartan 300 stood), and Salamis. He wanted to record the events that had happened and find out what had caused them, and so travelled around, finding information in records and talking to people.

As Herodotus said in his Histories ‘The purpose is to prevent the traces of human events from being erased by time, and to preserve the fame of the important and remarkable achievements produced by both Greeks and non-Greeks; among the matters covered is, in particular, the cause of the hostilities between Greeks and non-Greeks.’ The Histories, Robin Waterfield translation (2008) He called his work his ‘Inquiry’. In Ancient Greek, the word was ‘Historia’.

The more specific translation of ‘historia’ is choosing wisely between conflicting accounts Other people in the ancient world learned of his work and were inspired, and so the practice of history began. When the Romans came along, they adopted much of Greek learning,

Greek remained the language of the learned during the Roman period, and was the most common language spoken in Rome. The great universities of the time, our Oxbridge, were in Greece (at Rhodes and Athens) and those who fancied themselves either as academics or cultured (such as the Emperor Nero) would flock to Greece. However, Roman traditionalists, particularly in the Senate, did not find this philhellenism becoming, feeling it threatened their ideals of masculinity. Medicine also remained in Greek hands during the Roman Empire, which explains why most of our medical terminology comes from Greek. including history (the word for which they adopted into their Latin language, and it came to mean ‘a narrativeA story; in the writing of history it usually describes an approach that favours story over analysis.A story; in the writing of history it usually describes an approach that favours story over analysis. of past events’) and the practice spread further. Roman writers such as Cicero laid down rules for the writing of history. These included that the truth should be told impartially (regardless of who it might offend); should be organised chronologically and geographically; it should provide a narrative of great events, their causes and their protagonists; and that it should be well written. Once belief in Christianity took hold across Europe, learning and knowledge became more limited and was restricted to monks and others within the Church. As all books had to be written by hand, monks would spend days writing and copying texts.

There’s a fabulous legend relating to the largest known surviving medieval manuscript in the world, the Codex Gigas. Thought to have been created in the 13th century, it contains the full Bible, plus a number of historic documents written in Latin. The myth goes that the monk who created it had broken his monastic vows, and as punishment was to be walled up alive. In bargaining for his life, he promised to pen in one night a book that would contain all of human knowledge and glorify the monastery forever. He was allowed to set about his task, but by midnight he was sure that he would fail, and would therefore suffer his punishment. To avoid it, he is said to have made a pact with the devil, who completed the manuscript for him, and put his signature (a picture of the devil) within it. The book has since been known as the Devil’s Bible. Tests have shown that it would have taken five years of solid writing to have completed it. This meant that the Church controlled the information, and decided what other people should know. History continued to be recorded and studied, but now it was within the limits of a Christian understanding of the world, and within the limits of Christian scripture, which was taken as truth.

Rich families might commission works of history, and would also have greater access to information. Western medieval knowledge expanded thanks to contact with the Arab world during the Crusades, and again as direct trade with the rest of the world increased. In 1440, Johannes Guttenberg introduced the printing press to Europe.

He’s usually credited with the invention of the printing press, although printing had been in use in Asia for at least 600 years before Europe got a press. Instead of relying on monks to copy books, more books could now be printed in less time. Reliance on the Church for information reduced and more information from a variety of sources became available. At the same time, interest in Classical Greece and Rome grew, and learned people looked to the ancient writers, such as Cicero, to inspire them.

This was partly due to the Fall of Constantinople to the Ottoman Turks in 1453, which caused a wave of Greek speaking intellectuals and Greek texts to spread into Europe. It was also around this time that the meaning of the word ‘history’ became what it is today: the study of the past through the written word. However, belief in the Bible as the truth was still strong, so people fit what they learned about the world and the past into the story told in the Bible.

Living in the Dakota building, John Lennon and Yoko Ono apparently employed a man 'whose sole job was to polish the apartment's brass doorknobs' .

"Democracy is the worst form of Government except for all those other forms that have been tried from time to time. "
~ Winston Churchill

585 BCE The first recorded predicted solar eclipse (by Thales of Miletus) stopped a battle between the Lydians and the Medes, who agreed to a truce.
1533 Archbishop of Canterbury Thomas Cranmer declared Henry VIII's marriage to Anne Boleyn valid.
1644 Up to 1,600 civilians and supporters of parliament were killed by Royalist forces during and after fighting at Bolton. It became known as the Bolton Massacre and a staple of Parliamentarian propaganda.
1849 Author Anne Brontë died of tuberculosis, aged 29.
1937 Alfred Adler, the Austrian psychiatrist who introduced the concept of the inferiority complex, died of heart failure while on a visit to Aberdeen.
1937 Conservative politician and famous appeaser of Hitler, Neville Chamberlain, became prime minister.
1945 American-born Nazi propagandist Lord Haw-Haw (William Joyce) was shot in the buttocks and captured. He was tried in Britain for treason (despite being an American) and hanged.