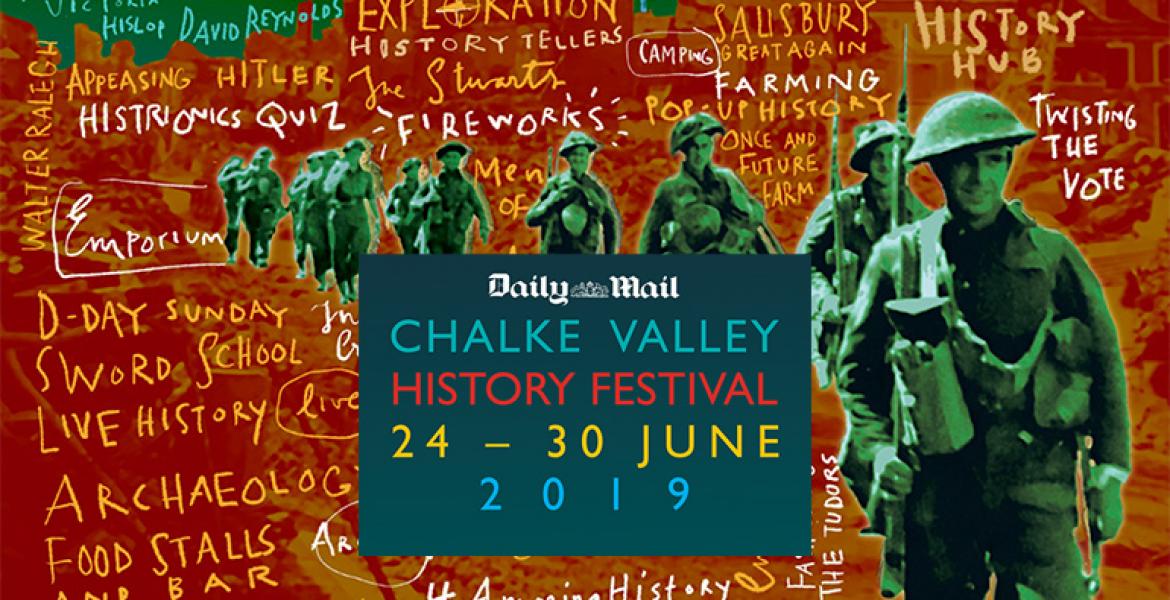 During the last week of June 2019, a festival in the beautiful rolling countryside of South West England pulled in thousands of visitors from across the country and beyond. There was music, entertainment, and a multitude of familiar faces to be seen on the several stages and around the site, enjoying the festival spirit. Travelling back on the Sunday evening after an exhausting but inspiring time, we were asked by vaguely interested petrol station assistants whether we’d seen anyone good. Our response, that we’d seen Peter Frankopan, Dan Snow, Charlie Higson, and Al Murray confused and intrigued them. Because we hadn’t attended the music festival happening forty miles away; we had attended the much more scintillating, and clean, Chalke Valley History Festival.

The Chalke Valley History Festival started life in 2011 as a fundraiser for the local cricket club. Intending only to be a one-off, it proved so popular that the organisers repeated the event the following year and every year since, growing the festival in size and ambition. In 2013, the Daily Mail became its main sponsor and in 2017, it moved to a larger, 70-acre site. It is now the largest festival dedicated to history in the UK. Yet it has not lost its community spirit and ethos: the Chalke Valley History Trust promotes the study of history, especially to young people, sponsoring history projects and providing funding for study. It also runs the History Festival for Schools, delivering a specially designed, interactive programme to thousands of students each year.

There is no doubt that the festival is serious about history. The week featured an impressive line-up of over 140 speakers, including academic big-hitters such as Ian Kershaw, James Daybell, Niall Ferguson, and Jeremy Black. Many were famous faces from television – historian-adventurer Sam Willis, writer and presenter Dan Jones, and broadcaster and professor, Kate Williams, for example – as well as magnificent authors like Antonia Fraser, Tracy Borman, and Tom Holland. But a number of speakers from outside the history profession were also there – Adam Rutherford, Ian Hislop, Jacob Rees-Mogg, Martin Bell, and Harry Enfield all made an appearance. They covered topics and periods as diverse as The Illyad and Donald Trump, ‘Socrates in love’ and ‘Russia and the history of international election rigging’, as well as an entirely new project for 2019: the thread of history. This is the attempt by a huge number of leading historians, in conjunction with Chalke Valley, to thread together the different strands of British history from 1603 to the present. There will be seven talks each year, over a period of five years, with those this year considering James VI and I, the civil wars and Cromwell, and the RestorationThe restoration of the monarchy and the return to a pre-civil war form of government in 1660, following the collapse of the Protectorate.. The eventual aim is to compile a book to be published by Bantam Press in 2023, a free copy of which will be given to every British secondary school. In the meantime, talks will be made available as podcasts and downloadable chapters.

This is the essence of the Chalke Valley mission: to make history accessible to the many, and to inspire young and old alike to think more deeply about it. The festival is not therefore simply for die-hard fans of history. It does not have an elitist approach and does not belong to that group of festivals that sneer at popular history in all its forms. This is not what history should be about: history affects us all, and so we all should have access to it. It is the story of ourselves, our families and communities, our identity groups and nations, and our world. It is not just for old men locked in ivory towers, and Chalke Valley History Festival understands that.

As such, ticketed talks were only half the attraction: there was so much more to do on-site. Chalke Valley regulars like the History Tellers and the History Maker told well-researched, humorous, and original stories from history, and these were complemented by a wide range of ‘Pop Up’ talks by respected historians, covering everything from Anglo-Saxon queens to the history of plastic, in an informative yet light-hearted way. Living history groups didn’t just potter around the site – or even just act out battle tactics with two original Sherman tanks (thanks to the 1st Royal Anglian’s Reconnaissance Platoon) – but were interviewed by the likes of Guy Walters and James Holland, and really did help bring history to life. Then there were museums and other organisations occupying marquees, providing hands-on experience, activities, and even hobby-horse jousting. Shopaholics and foodies weren’t left wanting: the Emporium featured independent traders selling a range of goodies from wine – and hangover tablets – to properly-sourced artefactsObjects made by humans that are of historical interest.Objects made by humans that are of historical interest.Objects made by humans that are of historical interest.Objects made by humans that are of historical interest., as well as much-needed sun hats, while the Waterstones tent had far too many fascinating books – and book-signings – to be overlooked. Food choices were impressive, with everything from Thai and Indian curries to fresh pizzas cooked in a traditional wood oven, the best fish and chips I’ve had in a long time, and gloriously-moreish Purbeck ice cream. The Trethowans tent provided formal sit-down dining for those who preferred a more refined experience, while the central beer tent offered cooling shade, reasonably-priced alcoholic and soft drinks, and live music, including the D-Day Darlings of Britain’s Got Talent fame. Overlooking the whole site was a recreation of RB396, one of eleven Hawker Typhoons lost on 1 April 1945, paying homage to the 16,000 Allied airmen who lost their lives during the battle for Normandy.

Most festivals struggle to do everything right - or don't even try. Chalke Valley History Festival, however, makes history relevant and makes it inclusive; it understands its audience and provides for them accordingly. For those with families, there is enough to engage and enthral children and adults of all ages; for the avid history fan there is a multitude of riveting talks from well-respected authors from which to choose. And here is the main problem with the festival: there is simply too much to do, and too many hard choices to be made. We could have spent twice the time there and still come away wanting more. However, this makes one decision simple: to put the dates for the 2020 festival (22-28 June) in our calendar now!

Do you fancy winning a selection of signed books by this year's speakers? Visit our competition page to enter.

The History Tellers: In Conversation

"It always seems impossible until it's done. "
~ Nelson Mandela