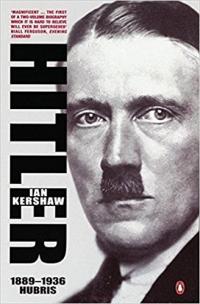 With extraordinary skill and vividness, drawing on a huge range of sources, Kershaw recreates the world which first thwarted and then nurtured Hitler in his youth, from early childhood to the first successes of the Nazi Party.
As his seemingly pitiful fantasy of being Germany's saviour attracted more and more support, Kershaw brilliantly conveys why so many Germans adored Hitler, connived with him or felt powerless to resist him.

"He who is the author of a war lets loose the whole contagion of hell and opens a vein that bleeds a nation to death. "
~ Thomas Paine