The Night of the Long Knives: The History and Legacy of Adolf Hitler's Notorious Purge of the SA 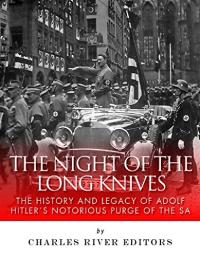 Germany's Nazi Party was remarkably implacable in the hostility it showed to the outside world, staunchly opposing both Communism and liberal democracy from the moment of its inception to that of its violent dissolution. The Nazis likewise showed steely, unwavering resolve in their lethal hatred of the Jews, the Slavs, and many others whom they labeled as "untermenschen," subhumans unworthy of rights, cultural standing, or life itself. They pursued their dark vision of "Aryan" superiority with a terrifying clarity and zeal, and they were willing to incur the enmity of the entire world in the process.

At the same time, despite this fanatic dedication to their overall vision, the Nazis had their own share of factional strife, and perhaps not surprisingly, the internecine struggle often led to violence, executions, and assassinations, byproducts of a totalitarian environment in which power appeared in its most undisguised and aggressive form. The firing squad, the bomb, the torture chamber, the extermination camp, the crematorium, and the noose of piano wire took the place of debate and persuasion in Hitler's Germany.

Like other totalitarian regimes, the leader of the Nazis kept an iron grip on power in part by making sure nobody else could attain too much of it, leading to purges of high-ranking officials in the Nazi party. Of these purges, the most notorious was the Night of the Long Knives, a purge in the summer of 1934 that came about when Hitler ordered the surprise executions of several dozen leaders of the SA. This fanatically National Socialist paramilitary organization had been a key instrument in overthrowing democratic government in Germany and raising Hitler to dictatorial power in the first place. However, the SA was an arm of the Nazi phenomenon which had socialist leanings and which was the private army of Ernst Röhm, which was enough for Hitler to consider the organization dangerous. Röhm was a challenger to the Fuhrer's position with his mushrooming SA ranks, which were more loyal to him than to the nominal head of Nazi Germany.

Though the SA as a whole survived Hitler's purge, its star was eclipsed by the rise of the newly favored Schutzstaffel (SS), which was instrumental in implementing the Night of the Long Knives. Additionally, the SA's senior leadership was decimated, leading to a loss of cohesion and focus. Even its overall commander, Ernst Röhm, fell victim to Hitler's violence, and Hitler himself later spoke words which summed up the calculated ruthlessness he used to deal with his enemies, both domestic and foreign: “The victor will not be asked afterwards whether he told the truth or not. When starting and waging war it is not right that matters, but victory. Close your hearts to pity. Act brutally.”

Several other factions were also involved. The German Army, or Reichswehr, was theoretically limited to a total of 100,000 men by the treaties ending World War I, but the German military was one of the major keys to power. Röhm dreamed of subsuming it totally into the SA, a nightmare from the point of view of the highly conservative and aristocratic officer corps. A man who championed the cause of the Reichswehr and kept it free of subordination to the SA could likely win its loyalty for years to come regardless of his own political and cultural agenda, which Hitler managed to accomplish with the purge.

"If you do not wish to dwell with evil-doers, do not live in London. "
~ Richard of Devizes (12th century)

350 General Magnentius deposes Roman Emperor Constans and proclaims himself Emperor.
1486 The Houses of York and Lancaster were united when Henry VII married Elizabeth of York (the eldest daughter of Edward IV).
1562 The Council of Trent was reconvened for its final time. It set out Catholicism's response to the Reformation.
1778 Captain James Cook became the first European to visit the Hawaiian Islands, which he named the Sandwich Islands.
1788 11 British ships with 800 convicts landed at Botany Bay, Australia, intending to found the first penal colony. They moved to a more suitable location eight days later.
1871 Wilhelm I was proclaimed German Emperor, 170 years to the day after Frederick I crowned himself King in Prussia.
1904 Hollywood's quintessential leading man, Cary Grant, was born in Bristol, as Archibald Leach.
1919 The Paris Peace Conference began. It resulted, among other things, in the Treaty of Versailles and the League of Nations.
1936 Rudyard Kipling, Nobel Prize winner and author of The Jungle Book died. His ashes are buried in Poets' Corner, Westminster Abbey.