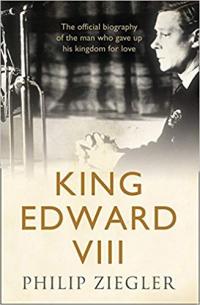 The authorised life story of the king who gave up his throne for love, by one of our most distinguished biographers.

In this masterly authorized biography, Philip Ziegler reveals the complex personality of Edward VIII, the only British monarch to have voluntarily renounced the throne.

With unique access to the Royal Archives, Ziegler overturns many myths about Edward and tells his side of the story – from his glamorous existence as Prince of Wales to his long decline in semi-exile in France. At the heart of the book is an unflinchingly honest examination of Edward’s all-consuming passion for Wallis Simpson, which led to his dramatic abdication.

Elegant and devastating, this is the most convincing portrait of Edward ever published.

"How wonderful it is that nobody need wait a single moment before starting to improve the world. "
~ Anne Frank

1837 The civil registration of all births, marriages, and deaths, became compulsory in England and Wales.
1858 Charles Darwin and Alfred Russel Wallace's papers on evolution were read at the Linnean Society in London.
1867 Canada became a self-governing dominion in the British Empire, following the British North America Act. However, it didn't become fully independent until the passage of the Canada Act in 1982.
1916 The Battle of the Somme, often considered to be one of the bloodiest and most futile offensives of the First World War, started at 7.30am. The first day was gruelling, with almost 20 per cent of the British army killed, but the battle would rage on for a further three and a half months.
1934 Ernst Röhm, leader of the Storm Troopers (SA), was shot dead by the SS on Hitler's orders during the Night of the Long Knives, the purge that removed 'inconvenient' elements from the Nazi Party and helped Hitler to consolidate his power.
1969 Queen Elizabeth invested Prince Charles as Prince of Wales at Caernarfon Castle.
2007 The ban on smoking in enclosed public spaces in England came into effect.