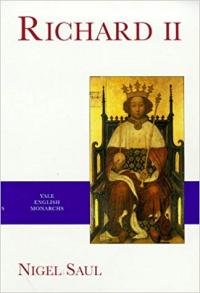 Richard II is one of the most enigmatic of English kings. Shakespeare depicted him as a tragic figure, an irresponsible, cruel monarch who nevertheless rose in stature as the substance of power slipped from him. By later writers he has been variously portrayed as a half-crazed autocrat or a conventional ruler whose principal errors were the mismanagement of his nobility and disregard for the political conventions of his age. This book-the first full-length biography of Richard in more than fifty years-offers a radical reinterpretation of the king. Nigel Saul paints a picture of Richard as a highly assertive and determined ruler, one whose key aim was to exalt and dignify the crown. In Richard's view, the crown was threatened by the factiousness of the nobility and the assertiveness of the common people. The king met these challenges by exacting obedience, encouraging lofty new forms of address, and constructing an elaborate system of rule by bonds and oaths. Saul traces the sources of Richard's political ideas and finds that he was influenced by a deeply felt orthodox piety and by the ideas of the civil lawyers. He shows that, although Richard's kingship resembled that of other rulers of the period, unlike theirs, his reign ended in failure because of tactical errors and contradictions in his policies. For all that he promoted the image of a distant, all-powerful monarch, Richard II's rule was in practice characterized by faction and feud. The king was obsessed by the search for personal security: in his subjects, however, he bred only insecurity and fear. A revealing portrait of a complex and fascinating figure, the book is essential reading for anyone with an interest in the politics and culture of the English middle ages.

"It is better for aged diplomats to be bored than for young men to die. "
~ Warren Robinson Austin, US ambassador to the UN