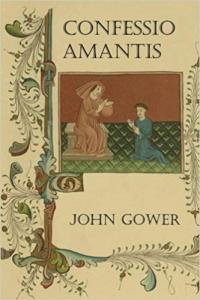 Confessio Amantis ("The Lover's Confession") is a 33,000-line Middle English poem by John Gower, which uses the confession made by an ageing lover to the chaplain of Venus as a frame story for a collection of shorter narrative poems. According to its prologue, it was composed at the request of Richard II. It stands with the works of Chaucer, Langland, and the Pearl poet as one of the great works of late 14th-century English literature. The Index of Middle English Verse shows that in the era before the printing press it was one of the most-often copied manuscripts (59 copies) along with Canterbury Tales (72 copies) and Piers Plowman (63 copies). In genre it is usually considered a poem of consolation, a medieval form inspired by Boethius' Consolation of Philosophy and typified by works such as Pearl. Despite this, it is more usually studied alongside other tale collections with similar structures, such as the Decameron of Boccaccio, and particularly Chaucer's Canterbury Tales, with which the Confessio has several stories in common.

A cuckolded man in classical Athens could get his revenge by shoving a large radish or a spiked scorpion fish up his wife's lover's anus.

"He so beautified the city [Rome] that he justly boasted that he found it brick and left it marble. "
~ Suetonius on Augustus

1381 The Peasants' Revolt began as people protested against the third poll tax in as many years. In the following weeks, rebels from all walks of life marched on London, where they were joined by the Londoners in righting the perceived wrongs, imprisoning and executing those they considered traitors, and burning important documents and buildings.
1431 French war heroine Joan of Arc was burnt at the stake for heresy and cross-dressing, aged 19, on the orders of an English-dominated jury. After she died, the English re-burnt her body twice to ensure nothing remained that could be collected as a relic.
1536 Less than a fortnight after the execution of his second wife, Anne Boleyn, Henry VIII married his third wife, Jane Seymour.
1744 English poet and translator of Homer, Alexander Pope, died at his home in Twickenham aged 56.
1778 French philosopher Voltaire, who was famous for his attacks on the Catholic Church and his defence of religious and political freedom, died aged 83. He was denied a Christian burial, although friends and family managed to bury him secretly at the Abbey of Scellières, Champagne.
1842 John Francis attempted to assassinate Queen Victoria for a second time as she and Albert travelled down Constitution Hill in a carriage. He was arrested, tried for treason, and sentenced to death. However, his sentence was commuted to banishment on the insistence of Victoria.
1929 The Labour Party under Ramsay MacDonald won the 'Flapper' general election (so called because it was the first general election in which women aged over 21 could vote), but with no overall majority.