She-Wolves: The Women Who Ruled England Before Elizabeth 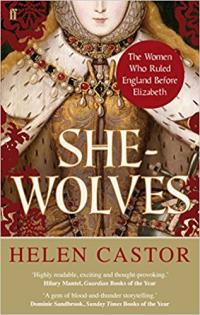 In She-Wolves, celebrated historian, Helen Castor, tells the dramatic and fascinating stories of four exceptional women who, while never reigning queens, held great power: Matilda, Eleanor of Aquitaine, Isabella of France and Margaret of Anjou. These were women who paved the way for Jane Grey, Mary Tudor and Elizabeth I - the Tudor queens who finally confronted what it meant to be a female monarch.

13th century chancellor of Oxford, Thomas de Cantilupe, banned students from carrying arms. At one point he had 20 confiscated bows and swords.

585 BCE The first recorded predicted solar eclipse (by Thales of Miletus) stopped a battle between the Lydians and the Medes, who agreed to a truce.
1533 Archbishop of Canterbury Thomas Cranmer declared Henry VIII's marriage to Anne Boleyn valid.
1644 Up to 1,600 civilians and supporters of parliament were killed by Royalist forces during and after fighting at Bolton. It became known as the Bolton Massacre and a staple of Parliamentarian propaganda.
1849 Author Anne Brontë died of tuberculosis, aged 29.
1937 Alfred Adler, the Austrian psychiatrist who introduced the concept of the inferiority complex, died of heart failure while on a visit to Aberdeen.
1937 Conservative politician and famous appeaser of Hitler, Neville Chamberlain, became prime minister.
1945 American-born Nazi propagandist Lord Haw-Haw (William Joyce) was shot in the buttocks and captured. He was tried in Britain for treason (despite being an American) and hanged.