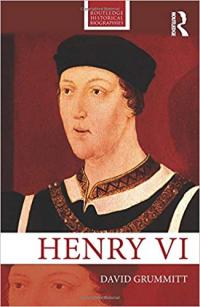 In this new assessment of Henry VI, David Grummitt synthesizes a wealth of detailed research into Lancastrian England that has taken place throughout the last three decades to provide a fresh appraisal of the house’s last King. The biography places Henry in the context of Lancastrian political culture and considers how his reign was shaped by the times in which he lived.

Henry VI is one of the most controversial of England’s medieval kings. Coming to the throne in 1422 at the age of only nine months and inheriting the crowns of both England and France, he reigned for 39 years before losing his position to the Yorkist king, Edward IV, in the early stages of the Wars of the Roses. Almost a decade later, in 1470, he briefly regained the throne, only for his cause to be decisively defeated in battle the following year, after which Henry himself was almost certainly murdered. Henry continues to perplex and fascinate the modern reader, who struggles to understand how such an obviously ill-suited king could continue to reign for nearly forty years and command such loyalty, even after his cause was lost.

From his coronation at nine months old, to the legacy of his reign in the centuries after his death, this is a balanced, detailed and engaging biography of one of England’s most enigmatic kings and will be essential reading for all students of late medieval England, and the Wars of the Roses.

In some London streets in the seventeenth century, one house in every three was a tavern.