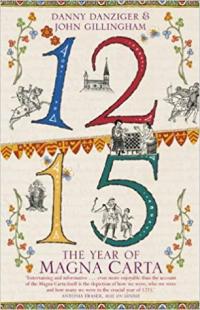 On 15 June 1215, rebel barons forced King John to meet them at Runnymede. They did not trust the King, so he was not allowed to leave until his seal was attached to the charter in front of him.

This was Magna Carta. It was a revolutionary document. Never before had royal authority been so fundamentally challenged. Nearly 800 years later, two of the charter's sixty-three clauses are still a ringing expression of freedom for mankind: 'To no one will we sell, to no one will we deny or delay right or justice'. And: 'No free man shall be taken or imprisoned or in any way ruined, except by the lawful judgement of his peers or by the law of the land'.

1215 - THE YEAR OF THE MAGNA CARTA explores what it was like to be alive in that momentous year. Political power struggles are interwoven with other issues - fashion, food, education, medicine, religion, sex. Whether describing matters of state or domestic life, this is a treasure house of a book, rich in detail and full of enthralling insights into the medieval world.

1536 Henry Fitzroy, the illegitimate son of Henry VIII and Elizabeth Blount, died of 'consumption' aged 17 (some sources state he died on 22 July).
1840 The Province of Canada was created by the Act of Union. In combining the predominantly British Upper Canada with the French Lower Canada, it was hoped it would reduce French influence through assimilation.
1903 The Ford Motor Company sold its first ever car, a Model A.
1914 Representatives of the Austro-Hungarian Empire issued the Serbian government with an ultimatum after the assassination of Archduke Franz Ferdinand. Demands included their own investigation, censorship of educational material and the press, and the abolition of certain organisations. Unsurprisingly, Serbia could not accept all of the ultimatum without being humiliated, leading to Austria-Hungary's declaration of war on 28 July.
1942 The SS Treblinka extermination camp was opened in Poland. Up to 900,000 Jews were killed there.
1962 Communications satellite Telstar relayed the first live transatlantic programme to viewers' homes.