The Battle of Waterloo Experience 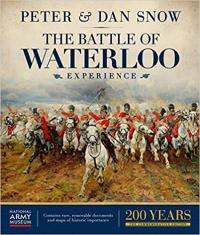 In association with the National Army Museum, well known military historians, journalists and broadcasters Peter and Dan Snow tell the story of one of the world's most famous and important battles. The Battle of Waterloo Experience provides what no other book on the battle contains—removable facsimiles of historic archival documents. Readers can relive this extraordinary moment in history by holding and examining rare or previously unpublished sketch maps, letters, orders, official papers and proclamations held by the National Army Museum and other archives and museums around Europe.

Peter and Dan Snow examine the strengths and weaknesses of the leaders, the armies and their weapons. Like all the greatest battles, Waterloo is steeped in controversy—the battle ended in decisive victory, but it might so easily have turned out differently. The Snows explore all the questions the battle raised. Who made mistakes? Whose victory really was it? Would Wellington have won without Blücher and his Prussians? What was the main cause of the French defeat?

Accounts from 1350 reveal that it cost 6d a day to keep a lion in the menagerie at the Tower of London, but to keep a prisoner cost only 1d.

"If civilisation is to advance at all in the future, it must be through the help of women, women freed of their political shackles, women with full power to work their will in society. "
~ Emmeline Pankhurst

306 Roman emperor Constantius died while on campaign at York, and his son, Constantine, was proclaimed emperor by the troops. He would eventually become known as Constantine the Great.
1137 Eleanor of Aquitaine, future wife of Henry II, married Louis (VII), the heir to the French throne. The marriage was annulled 15 years later due to consanguinity.
1261 The city of Constantinople was recaptured by Nicaean forces following its fall to Latin crusaders during the Fourth Crusade, and thus the Byzantine Empire was re-established.
1554 Mary I married Philip II of Spain. Much of England was not happy with the match, which sparked the ill-fated Wyatt Rebellion, but nor particularly was Philip: although he knew it was a good idea politically, his bride was 10 years his senior.
1593 In order to secure his crown, the Protestant Henry IV of France converted to Catholicism, allegedly saying 'Paris is well worth a mass'.
1603 James I was crowned king of England at Westminster Abbey.
1792 The Duke of Brunswick, commander of the coalition forces against revolutionary France, issued the Brunswick Manifesto. Promising vengeance if Louis XVI was harmed, it was designed to scare France into submission. It had the opposite effect, as it linked Louis even more with conservative, anti-revolutionary thought.
1834 Samuel Taylor Coleridge, poet, critic, philosopher, and theologian, died in London from heart failure, compounded by a lung disorder and probably not helped by his addiction to opium. He was 61 years old.
1865 Renowned Victorian doctor and pioneering surgeon James Barry died. It was only afterwards that his secret was discovered: he was actually female, making him the first medically qualified British woman/transgender person.
1909 Frenchman Louis Blériot made the first successful flight across the English Channel in a monoplane.
1934 The Austrian chancellor Engelbert Dollfuss was assassinated during a failed Nazi coup.
1943 Italian fascist dictator Benito Mussolini was removed from office and arrested.
1978 Louise Brown, the world's first 'test tube baby', was born in Oldham.
2000 Air France flight 4590, on Concorde, ran over some debris on the runway during take off and crashed into a hotel two minutes later. All crew (nine) and passengers (one hundred) aboard died, along with four people in the hotel.
2009 Harry Patch, briefly Europe's oldest person and the last living person from any country to have fought in the First World War, died aged 111.