Bedlam: London and its Mad 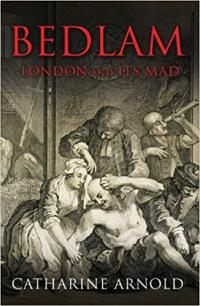 'Bedlam!' The very name conjures up graphic images of naked patients chained among filthy straw, or parading untended wards deluded that they are Napoleon or Jesus Christ. We owe this image of madness to William Hogarth, who, in plate eight of his 1735 Rake's Progress series, depicts the anti-hero in Bedlam, the latest addition to a freak show providing entertainment for Londoners between trips to the Tower Zoo, puppet shows and public executions.

That this is still the most powerful image of Bedlam, over two centuries later, says much about our attitude to mental illness, although the Bedlam of the popular imagination is long gone. The hospital was relocated to the suburbs of Kent in 1930, and Sydney Smirke's impressive Victorian building in Southwark took on a new role as the Imperial War Museum.

Following the historical narrative structure of her acclaimed Necropolis, BEDLAM examines the capital's treatment of the insane over the centuries, from the founding of Bethlehem Hospital in 1247 through the heyday of the great Victorian asylums to the more enlightened attitudes that prevail today.

Butchers who sold off meat in medieval London ran the risk of being placed in the pillory and having their meat burnt beneath them, so that the rancid smoke would rise into their face.

1720 Calico Jack Rackham's pirate ship was captured, along with Jack and other famous pirates Mary Read and Anne Bonny.
1803 The US Senate ratified the Louisiana Purchase, where the United States purchased the territory of Louisiana (almost one million square miles for the bargain price of $15million) from the French. However, the French only controlled a small fraction of that territory: the rest were Native American lands.
1818 The Convention of 1818 was signed by the United States and the United Kingdom. It set and defined the border between America and Canada at the 49th parallel of latitude.
1827 A combined British, French, and Russian force won a decisive naval victory over the Turkish and Egyptians at the Battle of Navarino during the War of Greek Independence. It was also the last major naval battle to be fought entirely by wooden sailing ships, and it thus marks the end of the sailing-ship era.
1960 The trial of Penguin Books for the publication of 'obscene material' in DH Lawrence's 'Lady Chatterley's Lover' began at the Old Bailey. The jury found for the defendant, leading to the liberalisation of the publishing industry.
1973 The Sydney Opera House opened. Its unique design makes it one of the most recognisable - and most photographed - landmarks in the world.