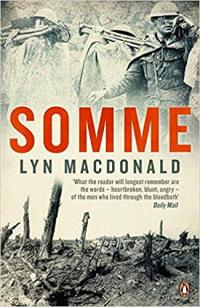 'There was hardly a household in the land', writes Lyn Macdonald, 'there was no trade, occupation, profession or community, which was not represented in the thousands of innocent enthusiasts who made up the ranks of Kitchener's Army before the Battle of the Somme...'

The year 1916 was one of the great turning-points in British history: as the youthful hopes of a generation were crushed in a desperate struggle to survive, and traditional attitudes to authority were destroyed for ever. On paper, few battles have ever been so meticulously planned. Yet while there were good political reasons to launch a joint offensive with a French Army demoralized by huge casualties at Verdun, the raw troops on the ground knew nothing of that. A hundred and fifty thousand were killed in the punishing shellfire, the endless ordeal of attack and counter-attack; twice that number were left maimed or wounded. Here, almost for the first time, Lyn Macdonald lets the men who were there give their own testimony. Their stories are vivid, harrowing, sometimes terrifying - yet shot through with humour, immense courage and an astonishing spirit of resilience.

'What the reader will longest remember are the words - heartbroken, blunt, angry - of the men who lived through the bloodbath...a worthy addition to the literature of the Great War...'Daily Mail

Over the past twenty years Lyn Macdonald has established a popular reputation as an author and historian of the First World War. Her books are based on the accounts of eyewitnesses and survivors, told in their own words, and cast a unique light on the First World War. Most are published by Penguin.

Bishop Meinward of Paderborn was apparently in the habit of having women dragged on their bottoms across his garden to clear it of weeds.

1536 Henry Fitzroy, the illegitimate son of Henry VIII and Elizabeth Blount, died of 'consumption' aged 17 (some sources state he died on 22 July).
1840 The Province of Canada was created by the Act of Union. In combining the predominantly British Upper Canada with the French Lower Canada, it was hoped it would reduce French influence through assimilation.
1903 The Ford Motor Company sold its first ever car, a Model A.
1914 Representatives of the Austro-Hungarian Empire issued the Serbian government with an ultimatum after the assassination of Archduke Franz Ferdinand. Demands included their own investigation, censorship of educational material and the press, and the abolition of certain organisations. Unsurprisingly, Serbia could not accept all of the ultimatum without being humiliated, leading to Austria-Hungary's declaration of war on 28 July.
1942 The SS Treblinka extermination camp was opened in Poland. Up to 900,000 Jews were killed there.
1962 Communications satellite Telstar relayed the first live transatlantic programme to viewers' homes.