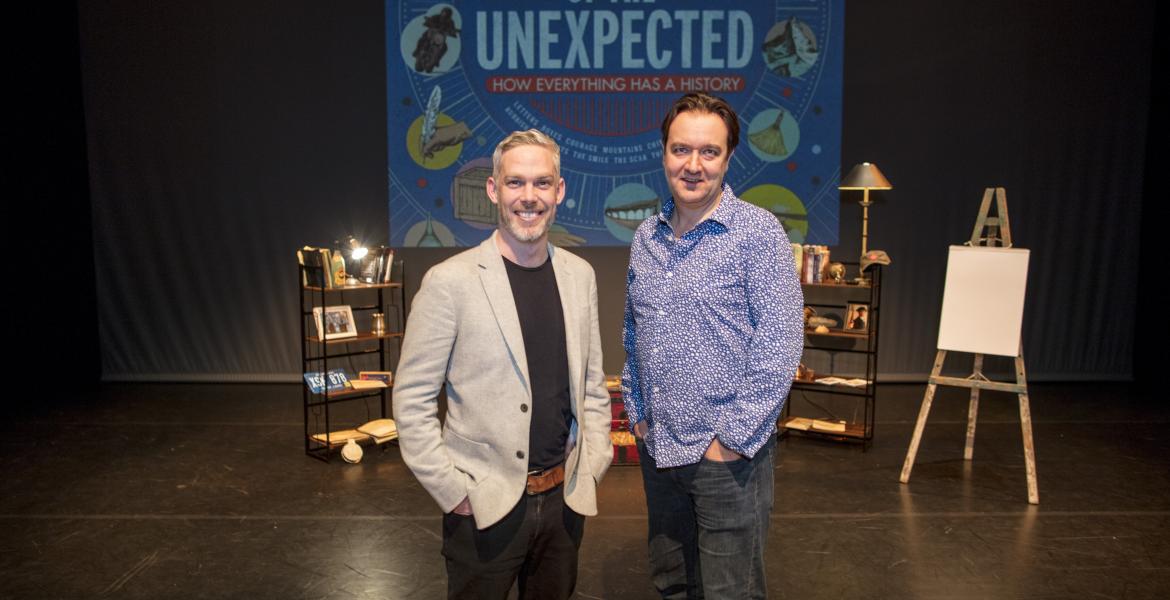 Did you know that the history of SHRINKING is all about Tudor Seapower?

The Tudors were brilliant at shrinking ships: they mastered the art of turning a huge three-dimensional wooden warship into a scale drawing. This was the period when the paper ship-plan was invented. Paper ship plans had a huge impact on the development of British seapower because they allowed shipwrights to study ship design as never before: to work out what was successful and to learn from past mistakes, such as the wreck of the Mary Rose, Henry VIII’s warship which sank off Portsmouth in 1545. They also allowed ship builders to build ships of exactly the same size and proportions, which allowed fleets to retain cohesion and exercise seapower more effectively.

Did you know that the history of TAMING is all about courting Roman political favour?

The Romans were fascinated with the natural and in particular the relationship between humans and animals. A huge variety of wild animals were captured throughout the empire, brought back to Rome and put on display – they included tigers, leopards, giraffes, wolves, bears, hippopotami, bulls, crocodiles and elephants. For politicians, providing access to these animals was a way of courting political favour and a way for politicians to display their wealth, power and influence. In fact parading exotic animals, once wild but now ‘tamed’ by the empire became virtually a requirement for anyone with political ambition.

Did you know that the history of PUPPETS is all about totalitarian rule and the struggle for freedom in World War II?

For millenniaThousands of years. puppets have been a powerful metaphor for totalitarian rule: they represent the total control of one being by another and the desire to break free. As a result they became particularly potent symbols during the Second World WarA global war that lasted from 1939 until 1945., especially as a tool for resistance fighters seeking to recruit. In particular, puppetry flourished in this period in Czechoslovakia where puppetry became a perfect platform for subversion following the German invasion of 1939. Improvised puppet shows flourished throughout the country in secret – in bars and basements. The Germans appreciated their value: more than 100 Czech puppeteers are known to have been killed in Nazi concentration camps.

Did you know that the history of GOADING is all about challenging male authority in the Viking world?

In the Viking world women played an important role in feuds, particularly as inciters of violence. They did this using words as weapons - by goading their menfolk with the specific intention of provoking them to action. Wives taunted husbands, mothers taunted sons, sisters taunted brothers, and usually to great effect. ‘The lot of you just sit there at home, making much of yourselves, and one could only wish there were fewer of you,’ declared the irate Gudrun, urging her husband and his men to avenge a perceived insult. It ended in ambush and murder.

Did you know that the history of SUBVERSION is all about Roman Walls?

Roman Walls – whether they were for houses and shops, forts and temples or simply defensive walls – were public spaces that could be conscripted for illicit ends. The walls themselves and their portals, windows, doorways and gates, could be used for clandestine meetings. They were also surfaces for forms of written and illustrated expression. The ruined Roman city of Pompeii, buried by the eruption of Vesuvius in 79 AD has more than 11,000 examples of graffiti. Favourite topics of Roman graffiti artists were eroticism, political dissentAn opinion or belief that goes against official teaching or commonly held views. and insult. One epigram in Pompeii reads ‘I’m amazed, O wall, that you have not fallen in ruins you who support the tediousness of so many writers.’

Did you know that the history of FURNITURE is all about protection in World War II?

The Second World War is full of stories of people hiding in, behind or under furniture. Perhaps most famously, the child-diarist Anne Frank hid from Nazis with her family in a series of rooms in a back extension of their home in Amsterdam – the entrance being hidden behind a bookcase. Wilek Loew, a Polish holocaust survivor recalled his mother hiding inside a couch while Mirjam Geismar recalled how her Jewish parents hid from the Nazis inside a special cupboard in Breeplein Church in Rotterdam. Hiding under furniture during air-raids was a common experience throughout Europe. Kitchen tables re-enforced with steel made excellent temporary bomb shelters.

Did you know that the history of DOORS is all about death in the Viking world?

Doors in the Viking world functioned as thresholds or boundaries between one realm and another that needed to be controlled. Most obviously they divided the inside from the outside world but also the earthly from the supernatural, and the living from the dead. This manifested itself in numerous intriguing ways but most notably in burials under the threshold of doors where the dead could keep watch over the living. The doorway was also a location where the dead could be judged by the living in what was known as a ‘door court’, a phenomenon described in detail in the Viking sagas.

Did you know that the history of FIRE is all about communication in the Tudor period?

In an age when the majority of people were illiterate the Tudor state needed a way to communicate simply with the populace, and one of the ways they did this was through fire. Systems of beacons were set up throughout the country to communicate simple messages – such as warnings – across huge distances. Smoke billowing from a well-placed beacon on top of a hill could be seen at least thirty miles away. Flames were also a key tool in the Tudor state’s war against seditionConduct or speech inciting people to rebel against the authority of a state or monarch., heresyA belief or opinion that goes against the official Church doctrine. and blasphemyThe action or offence of speaking sacrilegiously about God or a sacred thing. in which both books and people were routinely burned as a simple form of communicating a blunt message and controlling ideas and behaviour.

Histories of the Unexpected is a chart-topping podcast, series of books and LIVE! Show – written and presented by Dr Sam Willis and Professor James Daybell, to change the way that we think about the past.

‘History as You’ve Never Seen it Before’ Dan Snow.

Out now! Signed copies of all Histories of the Unexpected books are available from https://historiesoftheunexpected.com/shop/

Don't forget that Histories of the Unexpected are on tour! Check out their current tour dates at https://historiesoftheunexpected.com/tour/, and don't forget to check the page regularly, as new dates are constantly being added.

Some Anglo-Norman's French accents were so bad it was rumoured there was a cursed spring in Marlborough, Wiltshire. Those who drank from it would end up speaking 'Marlborough French'.

"There will be opened a gateway and a road to a large and excellent science ... into which minds more piercing than mine shall penetrate to recesses still deeper. "
~ Galileo