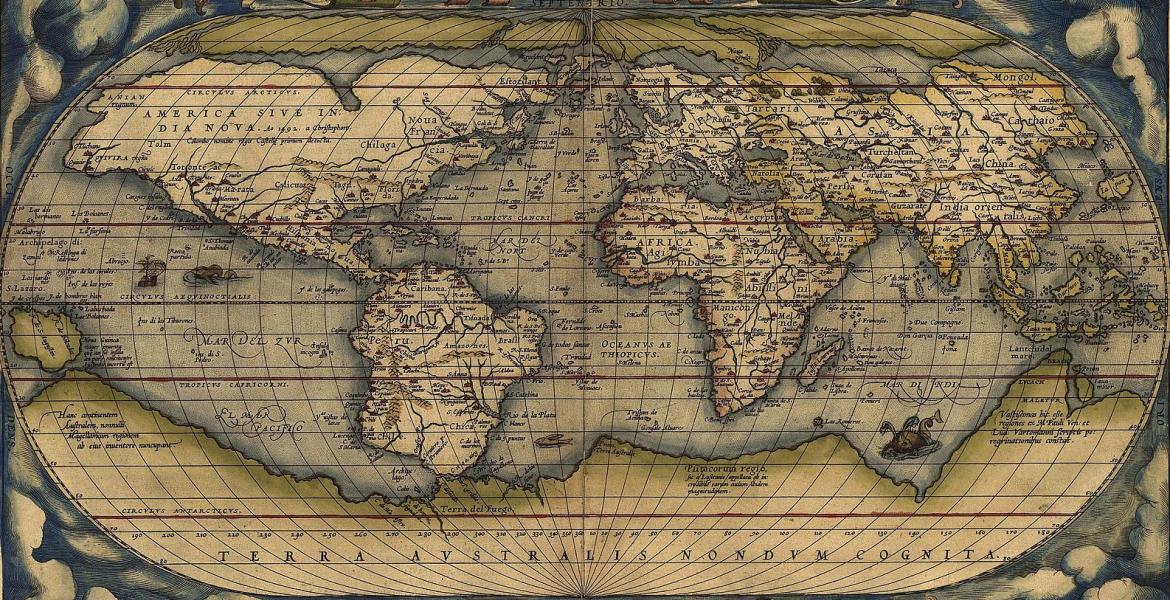 The Primary Frontier: Space and History

Old and new studies of history

The study of history has traditionally, for entirely understandable and logical reasons, focused on the actions of individuals and groups of human beings, identifying them as the key agents in an ongoing drama. Indeed, until relatively recently this could be considered to have been the discipline's raison d'etre. This belief in an essential purpose of historical study can be seen in the works of the earliest historians, their tales of epic movements of people frequently rejecting 'facts' in favour of telling the story in the style expected at the time. Naturally not all historians took such an approach, and the idea of choosing excitement over the 'truth' is no longer accepted, except perhaps in cinema. Yet the fundamental focus on humans as the main actors in history continues in most works to the present day.

However, some historians have tried to break with this tradition, still allowing human dramas and actions to take centre stage, but asserting the role of other factors as being of equal, or perhaps even greater, value. Made popular in works like Tim Marshall's Prisoners of Geography, Jared Diamond's Guns, Germs and Steel and most recently in Lewis Dartnell's Origins: How the Earth Shaped Human History, spatial theory and the influence of geography have been pushed to the fore, placing human agents in a context far broader than has been traditional.

Tim Marshall, Prisoners of Geography (London: Elliott and Thompson Ltd., 2015); Jared Diamond, Guns, Germs and Steel: A Short History of Everybody for the Last 13,000 Years (London: Jonathan Cape, 1997); Lewis Dartnell, Origins: How the Earth Shaped Human History (London: The Bodley Head, 2019). Where once land and sea were simply theatres in which human tales were played out, now these geographical elements are understood as key agents in their own right, pushing forward and also restraining human history in ways frequently beyond human control.

Mike Crang, 'Spaces in Theory, Spaces in History and Spatial Historiographies', 249-266, in Political Space in Pre-industrial Europe, ed. by Beat Kümin (Farnham: Ashgate, 2009) p. 251. The mainstream popularisation of this fascinating assertion and new focus for study is to be applauded, representing an opportunity to encourage a raising of consciousness and change of traditional views that is long overdue.

Yet why is there a need for different approaches to studying history? It cannot be denied that one of the main reasons for the continued focus on human actions is that there is a clear demand for this kind of story. We all thrill to the exploration of historical dramas, on paper, online, on stage and on the big screen. However, the application of new ways of looking at things is not simply there for its own sake. The attempt to bring a new perspective opens up a world of possibilities, posing a seemingly endless list of new areas for research and new questions to answer. This article is a crash course in the value of spatial theory when applied to history, as well as social and cultural anthropology – areas of study that should not be separated from an historical context, but which should embrace it.

Space has significant effects on both politics and decision-making as well as on the interaction between people, and peoples, existing within it, not just as a canvas on which these realities may be drawn, but an active agent in itself. Space influences human life and has effects on the formation of distinct cultures and societies. Far from merely influencing individual decisions and interactions, it is central to the creation of the psychological make-up of a people, the make-up which lies at the heart of those interpersonal experiences and the thought processes which lead to decisions.

An example: The significance of climate and geography in human life cannot be underestimated. On a surface level it can be seen in the structure and organisation of community groups, in the construction of buildings and places of worship, and in cultural features such as diet, traditions and leisure or recreation. Although all examples have their distinctive features, it is possible to make some broad statements. The effect of climate on lifestyle is perhaps the clearest example. Generally, societies which develop in colder climates differ from those formed in hotter parts of the world. In hot climates, life is frequently seen outside on the streets and in the open spaces of a village, town or city. In Vietnam, although the recent widespread introduction of air-conditioning has changed things somewhat, the majority of eateries, drinking venues and other places of leisure and social interaction can be found out of doors, both in villages and in large cities such as Hanoi and Saigon. In spite of frequently intense levels of heat, the bustling and enjoyable atmosphere created by meeting and socialising in the open air is central to the local way of life. Naturally, another factor influencing this situation is an economic one: many shop and food stall owners may be unable to afford the increasingly high rents for premises. Yet it is also interesting to see that a large number of restaurants and drinking establishments which are based inside buildings do not have a front wall and instead open directly onto the street. The walls and roof may provide shelter from the frequent heavy rain, but the effect of being outside is not diminished.

In colder places the examples are just as clear. Britain, with its infamously unpredictable weather and regular rainfall has developed differently. Central to communities, particularly in the past, has been the pub. With a more relaxed atmosphere than that of churches or other social meeting places, the warm interior, inside thick walls, with its roaring fires in winter has allowed the people of a community to gather in an intimate environment and spend time together. In contrast with life lived on the streets and in the open spaces, intimacy and the enjoyment of the 'cosy' has become a defining feature of British life.

Still, these climatic influences have gone further than simply having effects on social interaction. They have played a significant part in the development of a culture's psychological features. The need for protection from the elements, which has made the warm environments of public houses and other spaces in British society necessary, has encouraged the population to value privacy and personal space. In a small space, no matter how warm and enjoyable, it is important to ensure the comfort of others by allowing for and respecting the need for privacy. In contrast, Vietnamese society is far less private, at least in public spaces. Surrounded not only by other customers of drinking establishments and restaurants or food stalls, but also by the sounds, sights, smells and activities of the area, people accept such an environment and appear to require less personal space.

There is, however, a further effect of this need, or lack of need, for personal space in the public sphere. In a society where there is little privacy in public interaction, the need for privacy within the more personal and hidden context of the home and the family becomes essential. If personal interaction is frequently on display, family matters, particularly those of an uncomfortable or problematic nature, must be kept carefully guarded. The threat of discovery, which can lead to gossip and discussion among neighbours unconcerned with the need for privacy, is vitally important. In a normally private society such as that in Britain this is a given, but there is no reason to suspect that the case is not true in societies that might normally be considered more open.

These analyses and assertions are the result of the author's experiences as a long-term resident of both Britain and Vietnam with significant personal connections to both countries.

The first step on a greater journey

This article has been intended to give the briefest of ideas about how valuable spatial theory is. The example I have given is more anthropological than historical, but as said in the introduction, there is no need to separate these studies. Each influences the other. Cultures do not just pop into existence, they develop over long periods of time, influenced by events as well as space. For a short introduction, the purpose is to encourage readers to think about how these new ideas can be used to consider why the characters in history, great and small, have acted the way they have. Forthcoming studies of specific examples should help to make the main idea clear. Space is not just a canvas. It is the parent of every human being alive today and every human society which has existed since the evolution of the species. Its study should continue, its lessons taught, and its capacity for inspiring a new appreciation of the world itself embraced.

Excellent and simple introductions to the growth of human cultures, including how space has influenced them are Sapiens: A Brief History of Humankind by Yuval Noah Harari, Origins: How the Earth Shaped Human History by Lewis Dartnell, and Guns, Germs and Steel by Jared Diamond. For examples on how we can see these effects of space in the present day, try Prisoners of Geography by Tim Marshall.

There are also huge numbers of academic books and articles on this subject.

An 11th century bishop of Séez accidentally burned down his own cathedral during a military operation.

"I destroy my enemies when I make them my friends. "
~ Abraham Lincoln