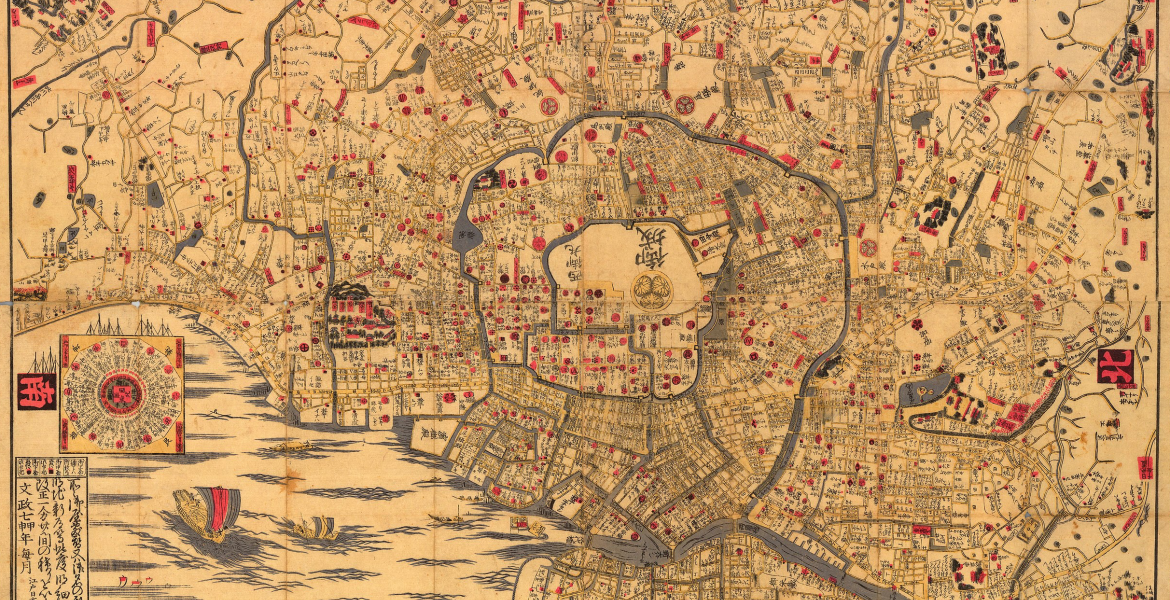 Charts and Minds: Maps - Beyond Geography

As a relatively new area of study, space in the area of history goes beyond politics and other traditional areas of analysis. One area offering fascinating clues about people's perceptions of space and the influence of geography on societies and historical events is looking at the creation of visual images and other types of art. In this article, we shall focus on visual works and what we can learn from them about psychological and cultural development by exploring them in context. Our focus, rather than on art produced for its own sake, will be on the production of maps.

Maps are usually looked at as more functional works which have the narrow aim of describing geographical spaces. This idea is just as narrow. Looking at maps produced outside the kind of scientific tradition which is common today lets us find much more varied conclusions and can show this kind of 'art' as a great source of historical information, not just a description of geography and topography.

A land of change

A fine example of this is found in Edo-Era Japan, but a little background is necessary to set it in context. Between the early seventeenth century and the middle of the nineteenth, Japan went through a period of isolation from the outside world. The Tokugawa shogunate (military government) made the decision fairly soon after taking control of the country in the year 1600, aiming among other things to restrict foreign influence which might have caused political or social instability. With the nation cut off from the outside world, it might seem that the culture could have stopped changing and entered a period of stagnation. Of course, this is not how cultures work. Cut off for the most part from outside influences, Japanese social, political and artistic culture began to develop in a fairly unique way. Instead of borrowing and adapting ideas from other cultures as they always had in the past, the Japanese explored their environment and society in ways they could access. One of the most distinctive products of this exploration is the ukiyo-e woodcut art style. It has since become such a distinctive and well-known image of this period in Japan's history that it is hard to visualise the Edo period in any other way

On the simple level of being pieces of art, the woodcut prints are not only distinctive, they are beautiful, with a beauty that is very much their own. They have a unique character that is really only seen outside Japan in the works Van Gogh did when he saw examples of them. One of the most famous examples is shown below.

However, there was one big difference between Hiroshige's image and Van Gogh's. Hiroshige used the woodblock printing style, whereas the Dutch artist used paints. Why is this important? Well, it can actually tell us a lot about life in Japan at the time. Woodblock prints were an extremely useful way of making a picture because, unlike painting, the images could be reproduced again and again, very quickly. To see why this was important, we are going to come back to our topic of maps.

Land of the rising fun

Historian Marcia Yonemoto has done extensive work on maps from Japan's Tokugawa or Edo Era. Instead of just analysing where things were, she has emphasised the need for us to consider why they were made and the social context in which they were produced. These reasons and influences had great effects on how the maps were made and what they did or did not show.

One of Yonemoto's articles focuses on the works of the artist Ishikawa Ryūsen, a man who was a writer of literature and also worked producing ukiyo-e images. He was not a professional map-maker, but at this point in time there was a growing demand for new kinds of maps which made producing them a good source of income and very few map-makers were trained professionals.

In this image, all the different levels and activities in a 'pleasure house' are shown clearly and all at the same time. We can look at this and get an idea of the style of buildings, the kinds of entertainment on offer – music, dances and tea ceremonies on the top floor – but also what was happening downstairs where people would come in. People are being greeted, there is one geisha carrying a child and two women in the right corner appear to be having a secret word with each other!

This way of showing space and the decision to portray human life in the expanding city of Edo – modern-day Tokyo – was also carried through into local maps. Ishikawa's maps broke away from the style of the earlier kinds produced by the government and military, ignoring accurate geography and instead highlighting the kinds of items that were more interesting to the new, growing middle class market in the city. The economy had developed rapidly since the beginning to Tokugawa rule, with domestic trade, commerceThe activity of buying and selling of goods and services.The activity of buying and selling of goods and services. and an advanced credit system already in place by the middle of the seventeenth century.

Sydney Crawcor, 'The Development of a Credit System in Seventeenth-Century Japan', The Journal of Economic History 21 (1961). People in the cities who were involved in these fields now had spare cash to spend and it is clear from the spread of this kind of map that they knew how they wanted to spend it.

These maps pointed out pleasure districts, areas for shopping and dining, attractive views and cultural sites of interest such as the famous shrine at Asakusa. At the bottom of this map there is an enlarged image of areas that had been newly built, not for military purposes or the residences of rich lords, but for common people. The fact that there was a market for this kind of map shows that there was also the development of a taste among the population for geographical information which related to their lives and an understanding of the space around them. Looking at maps like this can give the modern historian a huge amount of information about how people in Edo lived and what their main interests may have been.

Later on Ishikawa made larger maps of Japan as a whole which had a similar style where the roads across the country became the focus, together with information about places of interest along them, where travellers might like to stop and take in a bit of sightseeing. This again showed the increased interest in space and geography among the Japanese people and also how much travel had become more common. By this time in Japan's history, people had already begun taking what might be described as package tours around the country, with suggested itineraries and schedules. A nice example is in Laura Nenzi's article about consumer tourists visiting Sagami during the Edo period, which is well worth reading for those who are interested in this. Here, making maps was done with the purpose of emphasising people's experience of place and space, not just showing space itself.

This brief example should give readers some idea of the information we can find in maps and a lot of other work has been and is being done on this topic. It is my hope that with this little taster, those interested will want to read more. More than that, this area of study does not need people to dive into huge numbers of academic articles, if that is not what they want to do. Studying maps and thinking about what the mapmakers have chosen to show – and not show – and then to think about why, is something anybody can enjoy and find enlightening.

Anybody interested in Japanese history (which should be everyone) is advised to check out George Sansom's three-volume series. It takes you from the very beginning up to the modern day.

For an interesting – and frequently hilarious – look at Edo in the Tokugawa Era, check out the translation of Banraidō Kiyūfuku's Bragging of Edo.

Banraidō Kiyūfuku, Bragging of Edo in Gerald Groemer, 'Bragging of Edo: The Captial in the Eyes of a Provincial Doctor (Edo jiman)', Asian Ethnology78 (2019).
Related Reading

"If we are victorious in one more battle with the Romans, we shall be utterly ruined. "
~ Pyrrhus

1381 The rebels of the Great Revolt attacked London, burning John of Gaunt's Savoy Palace to the ground, with the total loss of goods of this house alone costing more than £10,000. The gaols at Newgate, Westminster, Fleet and Marshalsea were broken into and their inmates released, the Temple was sacked, and the provincial headquarters of the Knights Hospitaller were destroyed.
1483 William Hastings, a wealthy and important noble at the court of Edward IV, became 'Richard III's first victim', when he was summarily executed for treason at the Tower of London.
1628 Astrologer, reputed master of the dark arts and favourite of the 1st Duke of Buckingham, John Lambe was stoned to death by an angry London mob.
1842 Queen Victoria became the first ever reigning monarch to ride on a train, when she journeyed with Prince Albert from Slough to Paddington.
1917 The first and deadliest daylight German air raid on London of the First World War killed 162 people, including 18 children who were attending primary school.
1920 The US Post Office Department ruled that children could not be sent by parcel post.
1983 Unmanned US space probe Pioneer 10 crossed Neptune's orbit and became the first human-made object to leave the proximity of the major planets of the Solar System. The last weak signal was received from it in 2003, when it was 80 AU from Earth.